Eureka! – Let’s Shout with Archimedes about the Importance of Enabling Innovation 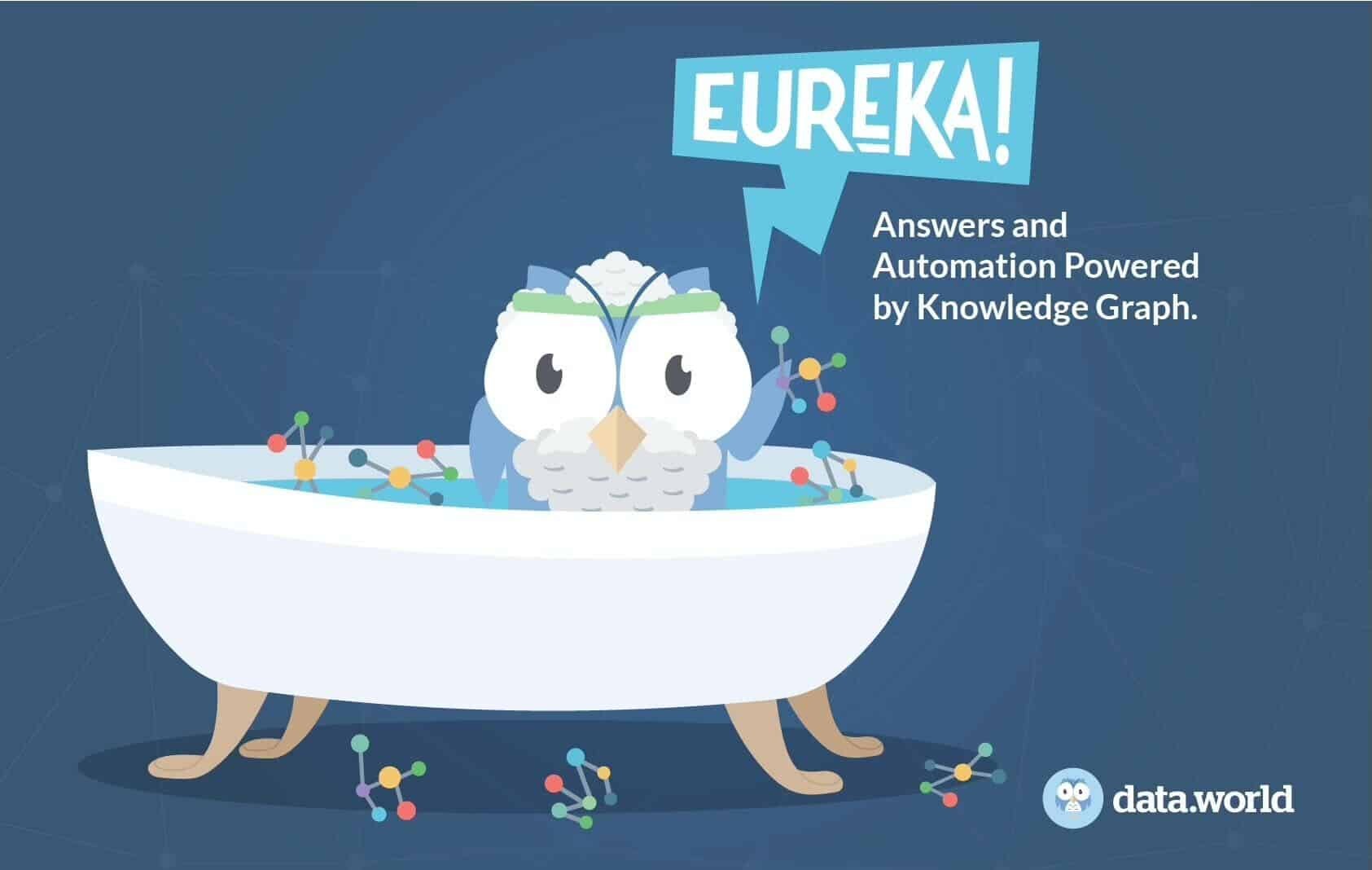 data.world CEO and Co-Founder Brett Hurt is sharing his thoughts on the theme of “People + Data” on a weekly basis in advance of our September 22 data.world fall summit. Read his previous post in the series, "May You Live in Interesting Times of Innovative Data Mastery," here.

This week, I’ll start with a narrow question before I get to a much broader one: Just what was the essential nature of Greek mathematician Archimedes’ innovation when he defined the principle of hydraulic displacement in the 2nd century BCE? You’ll recall from high school physics that this was his innovation in the measurement of mass that supposedly prompted him to leap from his bath and run naked through the streets of Syracuse, shouting “Eureka, Eureka,” or “I’ve found it, I’ve found it.”

In short, it’s in the same nature of what may prove our most important innovation this year at data.world, our recently unveiled data lineage product named “Eureka Explorer”. Eureka is an entire suite of products and capabilities that Archimedes would be proud of. It represents some of the most important developments in our history at data.world, fully leveraging our knowledge graph foundation — with 60 patents now, and counting — to really evolve the data catalog category.

Now, don’t worry. No one will be leaping naked from any bathtubs at our upcoming September 22 summit, themed People + Data. Although that would certainly be worthy of the Twitterverse, and you may want to when you receive a stunning demo of Eureka Explorer at the summit. But I do want to explain the connection – and the broader question.

The Categories of Innovation

As I’m sure is the case for many readers, I’ve long been fascinated by the sheer mystery of innovation. What’s behind what we call a “Eureka breakthrough?” The broad question of how and from where new innovations emerge has been the focus of thinkers since at least the time of Plato, who believed ideas arose from what he called the “demiurge”, an artisan-like fashioner of the universe.

As a technologist, I want to know if innovation is something we can consciously engineer, the approach of physicist Robert Oppenheimer whose Manhattan Project team of geniuses — for good or bad — unraveled for all time the mysteries of the atom. As an entrepreneur, I’m intrigued by economist Joseph Shumpeter’s argument that innovation is “combinatorial,” the ongoing combination of productive resources that led to his famous thesis of “creative destruction.” As an investor, I’m inspired by the work of Stanford University economist and author of the remarkable Nature of Technology, who challenges us to find the answer by opening up technologies and examining their “inside anatomies.”

Ultimately, of course, this is a “focus on the journey and not the destination” kind of question, and as such unanswerable. But in our space of data and digital technologies at data.world, I think we can meet the question halfway, which is what I want to discuss with you today in my fifth weekly essay leading up to our summit People + Data.

So far, we’ve discussed whether so-called “smart” technologies are actually making us smarter. We’ve explored how data analytics were the formidable tools of business survival in both the dot-com bust of the early 2000s and the Great Recession that was to follow in 2008. And we’ve explored data mastery, using the concept of data mesh, as the ultimate source of commercial resilience in a moment that flocks of potential black swans swoop over every corner of the economy.

Most obvious are those in the first category, direct, concrete, and executable. Let’s take the mRNA vaccine, which helped us get back to the best of life in person. The very first shot designed to fend off the SARS-COV-2 virus was injected into the arm of clinical trial volunteer Jennifer Haller in Seattle on March 16, 2020. This was the vaccine produced by Moderna, soon followed with similar innovation from Pfizer-BioNTech, and mass vaccinations began in December of that year. An executable innovation by any measure, one that surely saved millions of lives.

But less heralded is the work of Katalin Kariko, who pioneered study of so-called “messenger RNA” in her native Hungary in the mid-1980s, ultimately bringing that research to the University of Pennsylvania. There, some two decades ago, she and her colleague Drew Weisman invented the mRNA technology that was to ultimately make its way to all of our arms. This is enabling innovation.

To bring this back to our friend Archimedes, his invention of the means to measure the density of a metal in an irregularly shaped crown — by way of the displacement discovery — was not particularly revolutionary on its own. Sure, like a scene straight out of HBO’s new series House of the Dragon, it helped King Hiero II of Syracuse catch the metalsmith who had debased the crown with cheaper silver and sold it to him as solid gold. But the real drama was the resulting downstream innovations that truly mattered: from the new tools of engineering that enabled construction of the largest ship in history at the time, capable of carrying 600 sailors, to a pumping device known as the “Archimedes screw” that essentially makes water run uphill and is still in use today in irrigation systems around the world. And much innovation in between and beyond.

Our Own Eureka Moment

This divide between those innovations that are executable, as compared with those that are enabling, surely does not answer the question of just where “Eureka moments” come from. That, alas, must wait.

But the division is critical to understanding our work at data.world where we produce more than 1,000 product releases per year, the fastest innovation pace of my career. Some are highly practical, immediate, and executable, like our updated ‘Groups’ feature, which gives organizations more flexibility in managing members and permissions, and our simplified navigation page and ‘Discover’ button, which transforms an empty search page into an actionable entry point for all of your data resources. But then we also have our own Eureka moments that yield such tools as Eureka Explorer. Simply put, this is a tool to enable innovation in the use of data in ways previously unimaginable.

In one sense, it’s a tool of organization and visualization, allowing teams in every area of an enterprise to see concretely in various levels of granularity the basic facts of their operation – the relevant data – and the connection of those facts to those developed and used by other teams. It reveals and enables governance of what I’ve called the “supply chain of data.” In another sense, it’s a tool of what I call “business genetics,” enabling the tracking of business information origins from their inception to their stages of evolution and to their ultimate use in decision-making, what we call “lineage”. All told, Eureka is a “meta innovation,” a catalyst for further innovation from the teams it empowers.

Our own team — let’s call them ‘The Archemedi’ — will have much more to say and share on this at the summit.

If only we had these powerful tools at Coremetrics and Bazaarvoice, where we helped Select Comfort and 3M, as I wrote about in part two and three of this series, as well as hundreds of other major brands at both companies. Everything would have been so much easier!

Next week, I’ll be back in this space to discuss where this emerging new realm of data and where its mastery is leading us when I preview the work of my friend and author Byron Reese, one of the world’s leading experts on the data-driven destiny of humanity. Byron will be my guest at the summit where he’ll discuss his latest, brilliant book, Stories, Dice, and Rocks That Think – How Humans Learned to See the Future and Shape It.

His talk on the evolution of data throughout human history and our species’ learned ability to share knowledge on an unprecedented scale will wow you. I hope you’ll join us next Thursday to hear it for yourself.