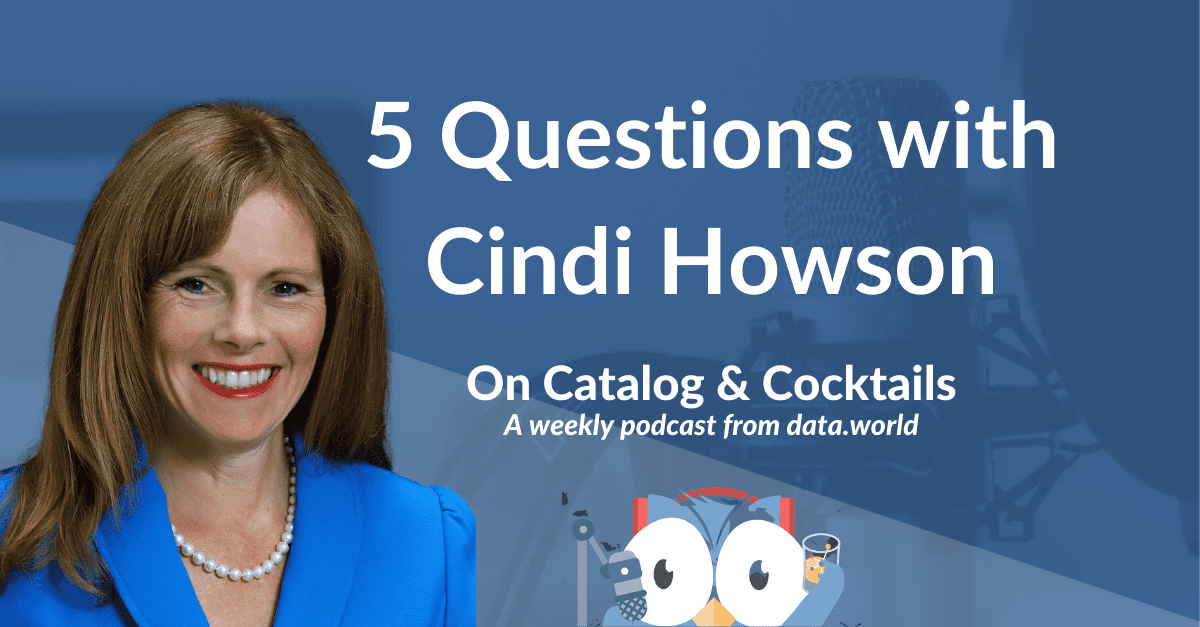 Self-service is great for listening to music, pumping gas, and figuring out what to binge watch on TV. But is self-service really what we want from our analytics? What happens to the business world when everyone is a data analyst?

Catalog & Cocktails hosts, Tim and Juan, were joined by Cindi Howson, chief data strategy officer at ThoughtSpot and host of The Data Chief Podcast to explore the positives and potential downsides of data democratization and how to drive data cultures that bias for good. Below are a few questions excerpted and lightly edited from the podcast.

I think I have awesome taste in music, but I'm not sure you're going to like my party if I'm the DJ. So, should everyone be the DJ?

Honest, no B.S. question: Should everyone actually be an analyst?

And actually, my dad was a DJ. So, I can picture Spotify and his contraption, his stereo. If there was an 11th commandment, don't touch dad's stereo. And I wouldn't want to learn his stereo, his sound system, all of that. But Spotify is easy enough. I can make my own playlist. So, that's what we want to happen for analytics is that it's approachable, easy enough where the business person has a question and they can get that answer and they can ask the next question, the next question. And then, even more visionary would be insight to action, but that's what we need to get to. Not that we're training people in hard-to-use tools.

Tim Gasper: Are there other drivers that go with enabling everyday business users in BI?

Historically, we've had to make design choices because things didn't scale. We had to extract data into small, in-memory cubes, or what have you to get to reasonable performance. And when you look at what some of our partners like Snowflake or Databricks... the performance on the volumes of data that they're getting at, you can break these legacy processes. And so, now we're giving people more granular data. And, as one CDO said to me, "That's where the money is. That's where the valuable insights are." And for years, data has just been aggregated into dashboards or cubes, because that was state of the art at a point in time.

Tim: Let's do a drilldown. So, on this particular topic, does that mean kind of trying to do less obfuscation?

Well, I don't want to obfuscate anything. I want to make it easy, but then also that you trust it and can explore it. So, what we don't want is the dead end. If I really just want a number, if I want to know what my sales are this month or last month, and that's all I really care about, then make that easy. And that might be, we like to call them live boards rather than dashboards. So, give me that number.

So, start with the high level, but do not have a dead end.

Juan: So, you're saying that we should stop saving data at an aggregate level. We should always have it at the granular level and then be able to go aggregate it later.

Yes, and I'm going to challenge this and aggregate later. I don't want you building cubes. That's a legacy technology and yet, that's the skillset that a lot of people know and feel comfortable with.

I wanted to touch on because we're talking a little bit about technology here and something we had a discussion about is low-code and no-code. And I think we probably have different perspectives here.

How do you see this whole world of low-code and no-code when it comes to analytics and analysts and people trying to go answer their questions?

I also look at platforms, let's go broader. Let's look at platforms like DataRobot and DataIQ. I mean, this is no-code machine learning as well. Our SpotIQ engine also generates insights running the algorithms for you. And you never see what that code is.

And some of the work like with OpenAI I think is quite interesting here as well. So, I think of low-code in terms of some of the development platforms. And then I think of it in terms of the analytics platforms. And I think this low-code approach is enabling insights for the non-analysts. And then, I think this approach is also what will ultimately drive some of the ecosystem integration so that you really can go from data ingestion to data storage, to your analytics, to then your predictive. And you're able to assemble these applications together without coding or low coding. Change this line in this script and that's it.

Tim: So, it sounds like, for the most part, you're pretty positive about low-code, no-code, and obviously it influences y'all's product and others. Is that kind of a right way to constitute it?

Yes. Why would I be negative? Are we worried about it or I think I spoke at VentureBeat and said, "Is this the death of IT?" And asked Tom Davenport that question. And I think it accelerates IT development. There needs to be a governance model in place, though. Are you nervous about it?

Yeah, I am nervous about it. You're now empowering people to go do all this stuff, but the world isn't that easy. Really the world is really complicated and you can't do that at such a higher level of abstraction.

Okay, but I have to push back here.

I do think it's like, "What's the right application?" But are you letting your fear override and squander the potential? And you need processes, but have we been too heavy-handed in some processes, and when do you need these processes?

So, I'll share with you a prediction that I'm noodling. If you look at, we've had data ops, ML ops…Do we not need to have some analytics ops or engineering ops? And there's concepts coming from somewhat the DBT community, but it's the rise of, instead of just the analyst, is it the analytics engineer? And so, it's applying some of these engineering principles to the workflow to make sure that it is scalable and repeatable. So, I still say, give the agility, maybe you need some engineering best practices applied, but at what point.

It was only 25 years ago that one of my bosses at Dow Chemical put out an edict. At that time, the way of communication was telexes. Manager would write it on a piece of paper, hand it over to a secretary who would put it in the telex machine that would print in some room. And you distributed these pieces of paper. That was only 25 years ago. He came out and said, "I want everyone writing their own emails." Email was new at that point in time.

So, I think when we look at low-code and no-code taking away some of the legacy manual coding processes. Should we be so afraid? Is it more about assembling and scaling?

Tim: When you think about helping people to become data DJs, how much of this is a technology problem versus a culture or a process or a people problem?

Yeah. It's largely culture. So, when we do roundtables, workshops around the world with our CDOs, chief digital officers, chief digital transformation officers, or heads of analytics, 67% attribute the inability to execute on their data and analytics plans to culture. To quote a survey stat from Randy Bean's new book, “Fail Fast, Learn Faster,” 92% is that combination of culture, people, and process. So, it's a big problem.

You get frustrated and you say, "Let's go buy that shiny new toy. That'll solve everything." And yet a shiny new toy without also addressing the culture, people, process problem, risks becoming shelfware which is terrible, terrible.

Visit Catalog & Cocktails to listen to the full episode with Cindi. And check out other episodes you might have missed.