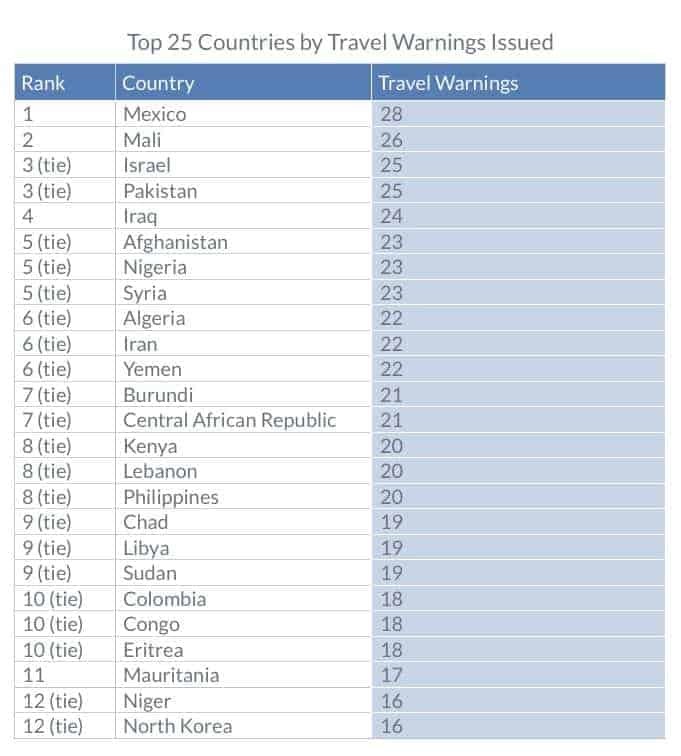 The New York Times recently reported that international travel demand to the U.S. “dropped 17 percent after the implementation of [President Trump’s] travel ban.”

Much less attention has been paid to the government’s role in shaping travel patterns out of the U.S., but each year, the State Department issues dozens of warnings with the intent of keeping Americans safe as they travel abroad. But what countries are targeted by these advisories, and what risks do Americans face by ignoring them?

Here are some of the most important findings:

Before we go deep on the results of our analysis, please note that you can review, reproduce, and build on our analysis by checking out the data and script used to reach the conclusions you’re about to read. This data includes the only downloadable version of the State Department’s travel warnings feed that we are aware of, and several other fascinating clues. At the end of this article, we’ve included a few additional questions we’re curious about. Let’s create new knowledge together.

We began by identifying the countries that are most often targeted by U.S. State Department travel warnings. Travel warnings are issued when the State Department wants “you to consider very carefully whether you should go to a country at all” for reasons such as “unstable government, civil war, ongoing intense crime or violence, or frequent terrorist attacks.”

For example, here’s an excerpt from a warning dated February 15, 2017:

There is potential for death or injury in Lebanon because of terrorist bombings and attacks. Violent extremist groups operate in Lebanon, including U.S. government-designated terrorist organizations Hizballah, ISIL (Da’esh), Al-Nusrah Front (ANF), Hamas, and the Abdullah Azzam Brigades (AAB). ISIL and ANF have claimed responsibility for suicide bombings in Lebanon. U.S. citizens have been the targets of terrorist attacks in Lebanon in the past. The threat of anti-Western terrorist activity persists, as does the risk of death or injury as a non-targeted bystander.

We filtered out warnings that had been issued for natural disasters, then ranked countries based on the number of warnings issued against them between October 2009 and June 2016. Here are the top 25.

Mexico tops the list with 28 warnings. Most countries in this ranking are participants in ongoing armed conflicts (e.g., Afghanistan) and/or are countries in which extremist groups regularly carry out terrorist attacks (e.g., Nigeria).

How do travel warnings square with the actual likelihood of being killed abroad?

The State Department tracks the incidence and causes of American deaths abroad. We used this dataset to identify countries where Americans most frequently experience life-threatening danger while traveling or residing overseas.

In the table below, we rank the foreign countries in which the most American civilians were killed between October 2009 and June 2016. Before ranking, we filtered the data to include only homicides, executions, and terrorist attack deaths.

In general, violent and terrorist-related deaths abroad are extremely unlikely. Between 2009 and 2016, 1,356 Americans — out of a population of ~316 million — were killed abroad. For comparison, in 2013 alone, 5,723 Americans were murdered on American soil.

Of the 1,356 killings that occurred abroad, 1,193 (88%) happened in the 25 countries listed above. And just one country, Mexico, accounted for 50% of those deaths. But before you swear off visiting, consider this. While it’s true that so many Americans die in Mexico, it’s also true that far more Americans travel to Mexico than to any other country. This holds true, but to a lesser degree, for some of the other countries near the top of this ranking, including the Dominican Republic and Jamaica.

With that in mind, we adjusted our ranking to account for the volume of travel from the U.S. We calculated the number of Americans killed in a country per 100,000 American travelers, using data from the Bureau of Transportation Statistics. We excluded any country that received fewer than 100,000 American visitors between 2009 and 2016.

Adjusting for travel volume shuffles the ranking; however, 16 of the 25 countries listed here also appear in the top 25 ranking of countries by absolute number of American deaths.

Pakistan and Thailand jump to the top of the list, each with a handful of deaths in a relatively small pool of American travelers. In both countries, all deaths were homicides. The Philippines, Haiti, and Honduras round out the top 5.

Surprisingly, there is only modest overlap between this ranking and the set of countries receiving the most travel warnings. Of the top 10 countries ranked here, only 4 — Pakistan, the Philippines, Nigeria, and Mexico — were among the top 25 countries targeted by travel warnings.

On the whole, there is a significant relationship between the number of American deaths abroad per capita and the number of travel warnings a country receives (r = 0.56, p = <.001).

In which countries are warnings well correlated with the risk of death? In which are they not? In the rankings below, we identify countries that exemplify each pattern.

The 5 countries on the left above are those where American traveler deaths are proportionally very similar to the number of travel warnings. This suggests that State Department travel warnings are accurately conveying the level of danger for this group.

Continuing left to right, the next 3 countries are where warnings are “under-issued,” i.e., the risk of death is relatively high for Americans, but no warnings were issued in the ~7-year period we examined.

The 7 remaining countries on the chart are often targeted by warnings, but Americans face a relatively low risk of facing life-threatening danger while visiting.

It may be the case that few Americans die in these countries because they are heeding the high number of travel warnings these nations receive. This raises the question of whether travel warnings and travel behavior have any significant relationship.

Does travel dip when warnings are issued?

Does traffic to a country drop after the State Department targets it with a travel warning? To find out, we again put the Bureau of Transportation Statistics dataset to work, this time comparing travel numbers in the 6-month periods immediately preceding and immediately following the issuance of a travel warning. For this analysis, we only considered countries that had received at least 3 warnings.

Egypt sees the largest drop-off in travel after a warning is issued with a 34% decrease in travel. Thailand travel appears to follow a similar trend; when warnings are issued, American travel to Thailand drops by 15%.

Travel declines modestly in Israel and Venezuela after the issuance of a warning, even though neither country lands a spot on our top 25 nations by American deaths per capita.

And strangely, travel to Ukraine, Nigeria, and Saudi Arabia rises by more than 10% after a warning is issued.

Overall, American don’t appear to be especially sensitive to State Department warnings. Of the 16 countries we featured here, double-digit travel change was seen for seen for only 5, and those changes could be driven by many other factors.

How to build on this analysis

Want to dig deeper? Here are some questions to get you going. Remember, we’ve published the dataset behind our conclusions and can’t wait to see what you find!

What if everyone at your company could find insights like this, not just the data-savvy? Collective Data Empowerment makes it possible.

Awaken your hidden data workforce with this complete guide.